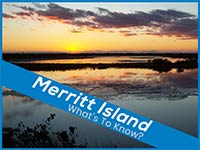 There are several reasons why Merritt Island Florida is such a great place to visit and to live!
Learn more about the things this city has to offer.

Merritt Island Florida: This Is What's Good About It

People are on the move. Big cities are more expensive, crowded, and polluted than smaller communities. COVID-19 has opened up a whole new world of work from home opportunities! This alone has shown many homeowners the advantage of being able to afford a larger space.

This is easily near the top reasons as to why so many people are making the move to Florida. The Sunshine State is an increasingly popular relocation destination for people from all walks of life. The state of Florida brims with history, culture, and tonnes of personality. Today, we're looking at a historic and charming area to the east of Orlando: Merritt Island.

Merritt Island is an up and coming community that sits on the shores of the Atlantic Ocean. It has a rich past (which we'll get to in a minute) but its future is looking just as bright.

The cost of living, crime rates, and unemployment are all lower than the US average. Meanwhile, homeownership is almost 20% higher than average in the US. The locals are extremely proud of their hometown, but don't let that scare you. They're also some of the friendliest people you're likely to come across.

If you're considering a move, Merritt Island could be the place for you. Read on to find out everything that's good about Merritt Island.

The first thing you should know about Merritt Island is that it's not an island – it's apeninsula. This means it is not completely cut off from the mainland, but rather is connected by a small strip of land.

Unlike its slightly confusing name, everything else we've said so far about Merritt Island is 100% true. Let's dig into a little bit about what makes it such a great place be.

It's no secret that Florida is a popular getaway destination. One of the great things about the sunshine state is that, as the name suggests, it's warm and sunny year-round.

The summers, though pleasant, can be humid in certain areas. The winters, on the other hand, offer just the right amount of heat and sunshine to keep the winter blues at bay.

Merritt Island, in particular, enjoys around a month more of sunshine than the average place average in the US. Its mild winters and hot summers mean it has something to offer at any time of year.

Being Neighbors with NASA

You can't talk about Merritt Island without talking about its most famous landmark: the Kennedy Space Center. The center was built in 1962 as a support for Cape Canaveral. It has been the site of many historic launches and rocket builds.

Nowadays it is home to the Kennedy Space Center Visitor Complex. A center featuring interactive displays, tours, exhibits of historical memorabilia, and memorials.

It is even possible for visitors to see live rocket launches accompanied by expert commentary. For space enthusiasts young and old, the KSC Visitor Complex is a dream come true.

What better way to take advantage of the sunshine state's namesake than a trip to the beach?

Situated right in the middle of Florida's Space Coast, Merritt Island is the perfect base from which to explore some of the best beaches on the east coast.

The coastal areas surrounding Merritt Island are renowned for their waves. For this reason, they attract a lot of surfers.

A quick drive across the bridge to Cape Canaveral you have an amazing selection of white sandy beaches. Cocoa Beach, one of the Top 10 Beaches in Florida is a mere 20 minutes away.

You also have the likes of Klondike Beach, Playalinda Beach, and Apollo Beach close by. Here, you can go swimming, tanning, fishing or relaxing. The Space Coast has something for everyone.

It's Great for Watersports

As we mentioned above, the Space Coast is known for its waves. This makes the area perfect for all kinds of fishing and water sports. Merritt Island Florida is actually home to the largest windsurfing event in the US.

Run by a local watersports store, the Calema Midwinters takes place around March each year. It's been running almost every year since 1985 and it's the be-all and end-all event as far as windsurfers are concerned.

Aside from being a world famous windsurfing location, Merritt Island is a great place to do all kinds of water sports. From surfing and kayaking to sailing and flyboarding, if you're into watersports Merritt Island is the place to be.

Or a Game of Golf

If watersports aren't your thing, maybe you're more fond of a good round of golf? If so, you'll never find yourself stuck for things to do on Merritt Island.

There are so many top-quality golf clubs in the surrounding area, the only downside is choosing which one to join.

First, you have The Savannahs Golf Course. Located close to the Kennedy Space Center, this 18-hole course comes highly recommended by all levels of golfer.

The Cocoa Beach Country Club in nearby Cocoa Beach has a number of different courses. Choose between 9 holes on the Dolphin Course, Lakes Course, or River Course.

A short drive into the mainland and you can also consider Turtle Creek Golf Club or Rockledge Country Club. Merritt Island is a golfer's paradise.

The Location is Pretty Amazing

If it's not obvious by now, there are tons of fantastic things to do in Merritt Island. But that doesn't mean that you'll never want to leave.

If you're based in Merritt Island, you are physically positioned to explore all of the amazing things the rest of Florida has to offer.

The nearest city, Orlando, is only about an hour's drive away.

Orlando is home to Universal Studios, I-Drive, Walt Disney World Resort, and the SEA LIFE Orlando Aquarium. Perfect for a day out with the kids. Not that there's not plenty for adults, too.

Once you've seen all Orlando has to offer, within driving distance you also have Tampa, Jacksonville, and even Miami.

It Has Such a Rich History

Even if you ignore all of the amazing moments Merritt Island has played host to for NASA, it's still a place that's teeming with history and culture.

Now a museum and cultural center, Sams House is the oldest standing structure in all of Brevard County. Originally built in 1875, it was dismantled, rafted upriver, and re-erected in the place where it still stands today.

Just up the coast, outside of New Smyrna Beach, lies Turtle Mound. This prehistoric archaeological site dates back to the Timucua people, who lived over 3000 years ago. The mound is made mostly from oyster shells and can also used for navigation due to the fact that it can be seen from the sea.

Merritt Island was also once home to the earliest British Colonial sugar plantation in North America. "The Elliott Plantation", as it is called, is still accessible through the wildlife refuge.

If that weren't enough, Merritt Island is also the site of many Native American burial grounds. So much history for one small town. And, as we said, that's before you even mention the space race!

Be at One With Nature

Merritt Island's history is truly breathtaking and its history may be overshadowed by all of the amazing wildlife reserves, parks, and sanctuaries it boasts.

If you love spending time outdoors and seeing an amazing array of wildlife in their natural habitat, Merritt Island has plenty to offer.

The Merritt Island National Wildlife Refuge is a sprawling 140,000-acre area with hiking paths, bird watching trails, and much more. In fact, the Kennedy Space Center is technically situated on the refuge. As well as rockets and astronauts, the refuge is also home to several species of endangered animals.

The Ulumay Wildlife Sanctuary is named after the village the Ais Native American tribe used to inhabit in the area. Here, there are also opportunities for bird-watching and hiking. Kayaking is popular too.

Finally, down towards the bottom of the island you have the Banana River Aquatic Reserve. This is a popular place to row or paddle through the waters in the hopes of spotting a manatee, dolphin, or other aquatic attraction.

Merritt Island is a warm, inviting, and exciting place that anyone would be lucky to call home. The nature, the history, and the proud towns people are just some of the things that will make you fall in love with this community.

For more information on other great communities Florida has to offer, check out the rest of our blog.

If this list has you wondering about a new life in Merritt Island, or Florida in general, get in touch with us today.

Our passion is helping people find their dream home here in the sunshine state.