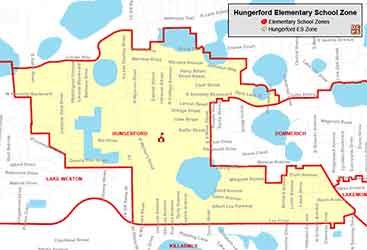 Searching for a home within the Hungerford Elementary School Zone? Then you are in the right place!  We work hard to make your next home search easy and efficient, so that when you are ready to buy or sell, we are ready to help!

Eatonville is widely known as Zora Neale Hurston's hometown, and the source of many of her plays and novels. However, the town has a rich heritage over and beyond its role in literary history.

Eatonville is one of several African American towns settled across the United States after the Civil War, incorporated in 1887. All of the town's officials and residents were black. The Hungerford School was established in 1889, modeled after Alabama's Tuskegee Institute.

The school was named after Dr. Robert Hungerford, a white physician living in Maitland who had been teaching reading and writing to local black men. The Hungerford School was founded by a young couple, Russell and Mary Calhoun; Russell Calhoun was a Tuskegee graduate. After Robert Hungerford died of typhoid fever in 1888, his son gave Calhoun 40 acres for a new school for African Americans. The school's purpose was to educate African American boys and girls (through 12th grade), with a curriculum of literacy, vocational, and life skills. Students lived on campus, and were assigned jobs or chores. The school's campus included a dairy, chicken coops, gardens, classrooms, boy's and girl's dormitories, and a manual arts building. Classes were taught in blacksmithing, agriculture, carpentry, dressmaking, cooking, and housekeeping. As the twentieth century progressed, classes in technical subjects such as mechanical drawing and radio were added. In 1950, the Hungerford School became a public school administered by the Orange County School Board. Old, original campus buildings were replaced by new buildings. Today, the school still occupies a large parcel of land in Eatonville, just on the east side of I-4.